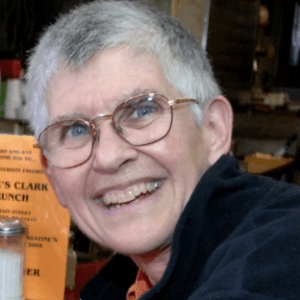 Career: Cynthia Enloe is Research Professor in the Department of International Development, Community, and Environment, with affiliations with Women’s and Gender Studies and Political Science, all at Clark University in Worcester, Massachusetts. Cynthia Enloe’s career has included Fulbrights in Malaysia and Guyana, guest professorships in Japan, Canada, UK, Australia, and New Zealand, as well as lectures in Sweden, Norway, Iceland, Germany, Portugal, Chile, Vietnam, Korea, Cambodia, Colombia, Bosnia, Turkey, Brazil, the Czech Republic, Ukraine, and at universities around the U.S. Her writings have been translated into Spanish, Turkish, French, Portuguese, Japanese, Korean, Swedish, Czech, Icelandic and German. She has published in Ms. Magazine and The Village Voice, and appeared on National Public Radio, Al Jazeera, C-Span and the BBC.

Professor Enloe’s fifteen books include Maneuvers: The International Politics of Militarizing Women’s Lives (2000), The Curious Feminist (2004) and Nimo’s War, Emma’s War: Making Feminist Sense of the Iraq War, (2010), The Real State of America: Mapping the Myths and Truths about the United States (co-authored with Joni Seager) (2011, revised 2014). Seriously! Investigating Crashes and Crises as if Women Mattered appeared in 2013. Enloe’s thoroughly updated and revised 2nd edition of Bananas, Beaches and Bases was published by University of California Press, 2014. Her new updated edition of Globalization and Militarism: Feminists Make the Link was published in 2016. Enloe’s newest book is The Big Push: Exposing and Challenging Persistent Patriarchy, (Myriad Editions, UK, and University of California Press, US, 2017)

A dozen of Cynthia’s lectures and interviews are now available on-line via podcasts and YouTube.

At Clark University, Cynthia Enloe has served as Chair of Political Science, Director of Women’s Studies, on the university’s Committee on Personnel, as well as its Planning and Budget Review Committee. Professor Enloe has been awarded Clark University’s Outstanding Teacher Award three times.
She currently serves on the editorial advisory boards of International Feminist Journal of Politics, Security Dialogue, Women, Politics and Policy, International Political Sociology, Critical Military Studies, and Politics and Gender. She is a member of WILPF’s International Academic Network.

Professor Enloe’s feminist teaching and research have explored gendered politics in the national and international arenas, with special attention to how women’s labor is made cheap in globalized factories (especially sneaker factories) and how women’s emotional and physical labor has been used to support governments’ war-waging policies—and how diverse women have tried to resist both of these efforts. Racial, class, sexual, ethnic and national identity dynamics, as well as ideas about femininities and masculinities, are common threads throughout her studies.

In 2010, Cynthia Enloe was awarded the Peace and Justice Studies Association’s Howard Zinn Lifetime Achievement Award. The American Council of Learned Societies awarded Cynthia its Charles Haskins Award in 2016. The Hague. In 2018, Cynthia was awarded the Charles McCoy Career Achievement Award by the Committee for a New Political Science. In 2020, the International Security Studies Section of the ISA selected Cynthia as its Distinguished Scholar.

In 2017, Cynthia was selected as one the Honorees named on the Gender Justice Legacy Wall, installed in the Hague at the International Crimes Court.

When she isn’t traveling and lecturing, Dr Enloe spends much of her time in Boston and in Key West.

On Feminism:
Strong women have been working toward equality and justice for generations. The suffragettes stood up when it was really not acceptable to take a stand, to speak in public, or to champion a cause. The suffragettes are an incredible example of the bravery and determination of women. But it isn’t over. There is so much to be done, but our heroic sisters showed us that we can do it! Because there is still great injustice, there will never be an end to feminism. Social changes happens via mother/daughter. Young women are bringing out their mothers, their mothers are bringing out their daughters. But they need courage. We need to work with each other.

Complicit – Be on The Look Out:
While we are aware of the injustices that have caused women to struggle, be careful when assigning “blame”. Often women are unknowingly “complicit”. They, as have men, been taught their roles from a young age. Womens’ roles are often based on veneration of men and as such, comply with their fathers, husbands, bosses without even being aware that they are doing it. They have been subtly rewarded all their lives for being pretty, good, quiet, not overt. So it’s easy to fall into the pattern. We need to learn and relearn that speaking up, even if there are repercussions, is good – scary – but good. Be aware that men have their own set of patterns that make them fearful that women will eventually discard their veneration of men and stand up for what they believe is right.

How do you think women can address their unwitting complicity with oppression:
Conversation. Talk about your fears, worries with other women. Talk honestly and encourage each other. Women need to be aware of their underlying patterns and try to move past them. This is not easy as most of us are not aware of the deep seated causes. Sexism and patriarchy are in every country. Women start talk to each other honestly, encourage each other. Women exploring together with each other that afraid of Have to make a go of it. The main lesson we have learned is that women should not stay silent – it’s not their fault.

How would you guide young women who want to make a difference:
There is no one way. Not just one path. But to start the journey, there are some things you can do that will hold you in good sted. Get involved with some kind of volunteer work. Do the every day ground work and learn what is truly needed at the grass roots level. Then you will know how to make a difference. Keep asking the hard questions and listen to the hard answers. Think about movements like “Me Too”, “Black Lives Matter”. They started with women standing up and being willing to put themselves out there. Know that at times it won’t be easy. But the women that brought us the vote didn’t have it easy either.

What do you think is the most important issue today.
Certainly climate disruption is important as are other environmental issues, immigration, corrupt governments, election . These are all the “results” of action of some sort. What needs to be done, is to look carefully at who is at the epicenter of these actions. Actually, these all are gender issues. Who drives big trucks that pollute, who owns the mines that destroy ecosystems, who builds developments that clear wetlands, who is in the judiciary making decisions. We need to explore who are the proponents of environmental degredation and make it public. We need to take womens’ lives seriously – how can they participate in resolving the pandemic, the cause of wars, the safety of elections. We need more responsible government. We need women. We need racial justice. Black Lives Matter was created by three black women. Racial justice is intertwined with gender justice. You can’t have one without the other.