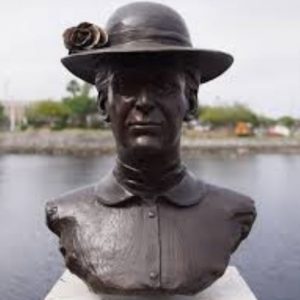 “Ella” C. Chamberlain, who lived in Tampa, Florida, planted the initial seeds for women’s suffrage in Florida. She was a persuasive public speaker and wrote a newspaper column from 1892 to 1897 that promoted women’s rights including the suffrage.  In January 1893 she organized and served as president of the Florida Woman Suffrage Association that initially consisted of eight men and a dozen women and was affiliated with the National Woman Suffrage Association. She was the first person to represent Florida at a national women’s suffrage convention.  She also worked for “mother’s pensions” that were an early form of social security for widows with children to support.  When she left Florida in 1897, suffrage efforts languished for lack of leadership until 1912.