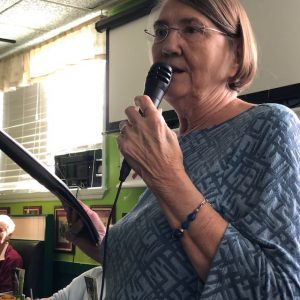 Joan is originally from Minneapolis, Minnesota. She and her husband Joe retired to Big Pine Key in 2003. They moved to the Key West in 2015. She began her career as a school library media specialist. Then she became the State Supervisor for School Libraries and Technology at the Minnesota Department of Education. After the Department of Education she worked for Apple Computer as a Director in Education Marketing. She has bachelor’s degrees in sociology and social studies education. She received her master’s degree in media and technology and did doctoral studies in education leadership.

She is a founding member of the Lower Keys League of Women Voters and served as its president for six years. She is a graduate of the Key West Ambassadors program class 22. She is also active in the Key West Sail and Power Squadron and serves as the organization’s web master and newsletter editor. She plays viola with the Key West Community Orchestra. She is also an avid genealogist.