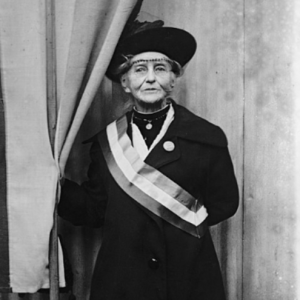 Mary A. Nolan – (1842 – May 19. 1925) Mary A. Nolan’s headstone in Jacksonville, FL reads “I am guilty if there is any guilt in a demand for freedom.” During her lifetime fighting for women’s rights Nolan was arrested 10 times and jailed 5 times—her most “notable” incarceration was at the Occoquan Workhouse in 1917. At the time, Nolan was 75 years old and the judge, citing her age, suggested that she pay the fine rather than do the time, but she refused and was sentenced to six days. Most notable is not that she served time, but that she wrote an account of the so-called Night of Terror that resulted remaining prisoners’ release and the firing of W.H. Whitaker, the superintendent of the Occoquan Workhouse.

Nolan was part of a group of protesters called the “Silent Sentinels.” The women used silent protest as a strategy for their cause, holding up banners that often quoted President Woodrow Wilson’s own words of freedom and democracy back to him in protest against his unwillingness to support their cause. The women protested in front of the White House gates beginning in 1917 and later in Lafayette Square until the 19 th amendment finally passed in 1919. The women were first arrested in June of 1917 for “blocking traffic.”

Over the course of the year, there would be subsequent arrests with the women experiencing unsanitary and cruel conditions in jail. The Night of Terror occurred on November 14, 1917 when the superintendent of the Occoquan Workhouse ordered the 40 guards to brutalize and beat the women. Mary A. Nolan’s full accounting of the event garnered support for the women’s cause and their sentences were vacated. In January of 1918, President Woodrow Wilson announced his support of the suffragist amendment.