The Story of Sojourner Truth

The League of Women’s Voters founder, Carrie Chapman Catt and early advocates for Women’s Rights, Elizabeth Cady Stanton and Susan B. Anthony, gave deference to Sojourner Truth’s insistence on equality for all, but, be that as it may, their sentiments did not convert into female solidarity across political racial divides. When Stanton and Anthony wrote “The History of Women’s Suffrage” in the 1880s, they highlighted white contributions while conspicuously missing were the contributions of African American suffragists. The National American Woman Suffrage Association denied Black Women the right to attend their conventions and they had to march separately from white women in suffrage parades. Though the Black women were largely ignored by the mainstream movement, they played an important role in getting the Fifteenth and Nineteenth Amendments passed.

Born into slavery in 1797, Isabella Baumfree, who later changed her name to Sojourner Truth, would become one of the most powerful advocates for human rights in the nineteenth century. Her early childhood was spent on a New York estate owned by a Dutch American named Colonel Johannes Hardenbergh. Like other slaves, she experienced the miseries of being sold and was cruelly beaten and mistreated. Around 1815 she fell in love with a fellow slave named Robert, but they were forced apart by Robert’s master. Isabella was instead forced to marry a slave named Thomas, with whom she had five children.

In 1827, after her master failed to honor his promise to free her or to uphold the New York Anti-Slavery Law of 1827, Isabella ran away, or, as she later informed her master, “I did not run away, I walked away by daylight….” After experiencing a religious conversion, Isabella became an itinerant preacher and in 1843 changed her name to Sojourner Truth. During this period she became involved in the growing antislavery movement, and by the 1850s she was involved in the woman’s rights movement as well. At the 1851 Women’s Rights Convention held in Akron, Ohio, Sojourner Truth delivered what is now recognized as one of the most famous abolitionist and women’s rights speeches in American history, “Ain’t I a Woman?” She continued to speak out for the rights of African Americans and women during and after the Civil War. Sojourner Truth died in Battle Creek, Michigan, in 1883. 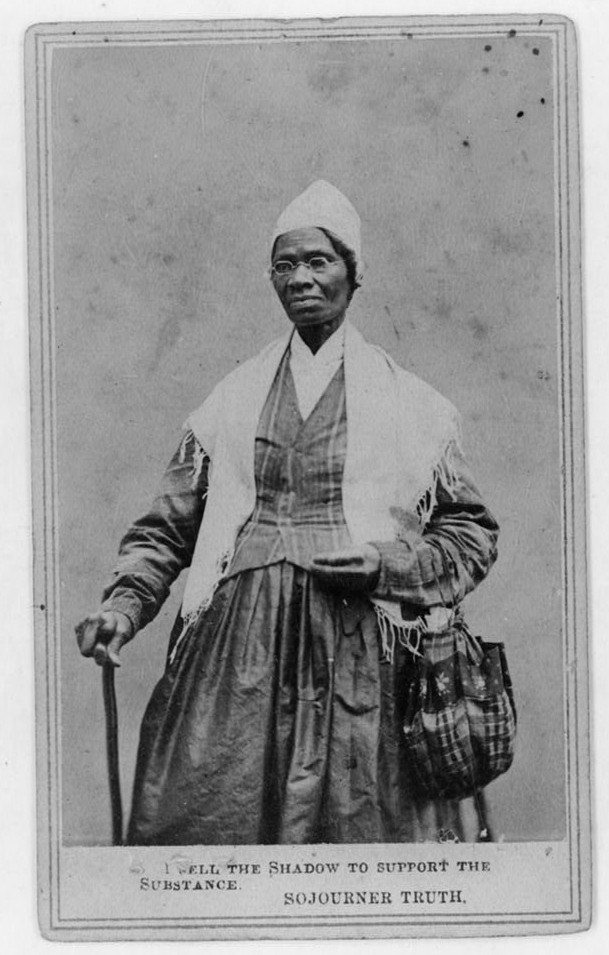 Well, children, where there is so much racket there must be something out of kilter. I think that ‘twixt the negroes of the South and the women at the North, all talking about rights, the white men will be in a fix pretty soon. But what’s all this here talking about?

Then they talk about this thing in the head; what’s this they call it? [member of audience whispers, “intellect”] That’s it, honey. What’s that got to do with women’s rights or negroes’ rights? If my cup won’t hold but a pint, and yours holds a quart, wouldn’t you be mean not to let me have my little half measure full?

If the first woman God ever made was strong enough to turn the world upside down all alone, these women together ought to be able to turn it back , and get it right side up again! And now they is asking to do it, the men better let them.

Obliged to you for hearing me, and now old Sojourner ain’t got nothing more to say.

This text is part of the Internet Modern History Sourcebook